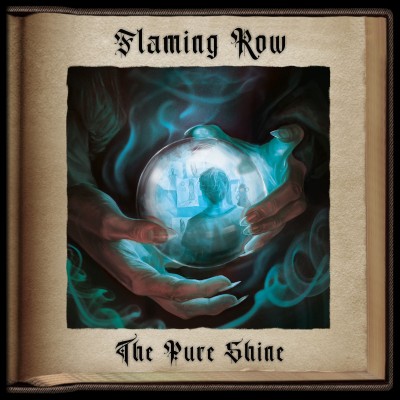 The new Flaming Row album "The Pure Shine" will be released on december 10th 2019. People can already preorder the album at Melanie and Martins webshop at www.gray-matters.de

Flaming Rows 3rd concept album "The Pure Shine" written by Melanie Mau & Martin Schnella is based on the novel "The Dark Tower" by Stephen King.

It took 6 years to complete the. The recordings for this album have started back in 2012 already before „Mirage – A Portrayal Of Figures“ was released. Melanie Mau, Martin Schnella, Marek Arnold and Niklas Kahl come up with a new Progressive Concept-Album which is about Stephen Kings novel „The Dark Tower“. We had to make a decision Writing a continuation of Mirage or making something different, Martin told. So the development of the music, that feels more natural than the previous albums led us to an already existing story. Melanie and I love watching great movies and when we saw „The Dark Tower“ the idea was born.
„The Pure Shine“ features an Orchetra-Ensemble, arranged and performed by Eric and Nathan Brenton (Neal Morse), on most all of the tracks. Fans of melodic Prog, powerful moments and a multitude of vocalists will get their money's worth.

„The Pure Shine“ will be released as Double-CD including a complete instrumental mix. The complex artwork is a 6-page DigiPack with an informative and fondly designed booklet.

People can already PreOrder „The Pure Shine“ at the Webshop of Melanie Mau & Martin Schnella at www.gray-matters.de. or via Email at Diese E-Mail-Adresse ist vor Spambots geschützt! Zur Anzeige muss JavaScript eingeschaltet sein!.
Everyone who preorders the album until november 14th will be mentioned in the CD booklet.